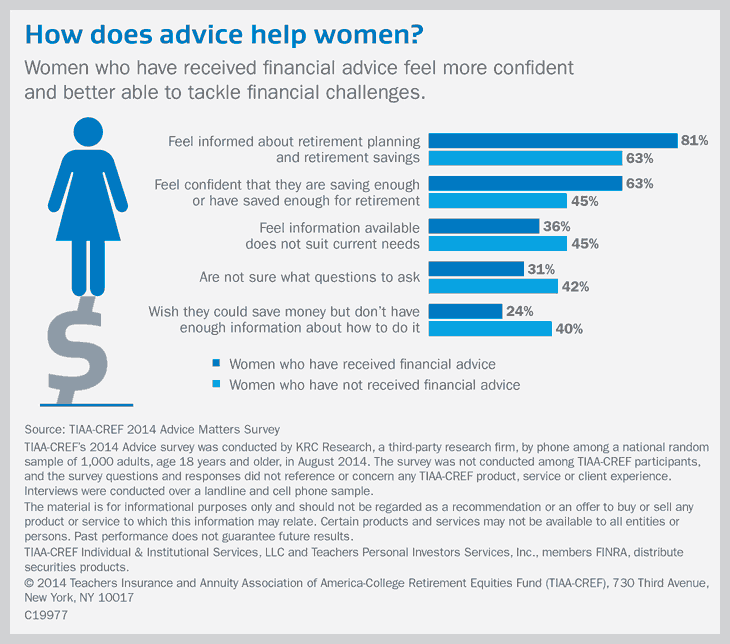 "Professional, personalized financial advice is out there, but women often get sidetracked by a number of barriers," said Kathie Andrade, executive vice president and head of Individual Advisory Services at TIAA-CREF. "We have found that there are ways to break through these obstacles and help women access relevant advice in ways that are convenient to them."
The number of women who say they rely on financial services providers for advice has increased steadily (from 36 percent in 2012, to 51 percent in 2013 and now to 61 percent in 2014). Women’s use of financial services providers' websites or online tools is also on the rise (from 20 percent in 2012, to 33 percent in 2013 and now to 41 percent in 2014). To support this growing trend, TIAA-CREF has launched the Woman2Woman Financial Living online community to serve as a hub where women can access planning tools and learn from experts.
"Nearly half (49 percent) of the women surveyed say the ability to interact with someone online with basic personal financial questions would be helpful," said Andrade. "The TIAA-CREF Woman2Woman online community provides the resources they need."
Fifty-seven percent of women surveyed would like access to tools and calculators that break down complex advice principles, and more than half of women are interested in participating in on-demand webinars (54 percent) or live seminars (52 percent) that cover personally relevant financial topics. The Woman2Woman online community provides those features in an online community where women can share financial insights, as well as articles and other resources to help navigate financial challenges.
TIAA-CREF also developed the Woman2Woman Financial Empowerment series of workshops and webinars, which have reached more than 10,000 women covering the full spectrum of life stages over the past three years. More than one-third of attendees later request in-person meetings with a financial advisor to discuss their retirement goals and objectives, and more than two-thirds of attendees increased their contributions to their retirement plans.ii
"It's encouraging to see women really embrace the counsel they receive and use it to their advantage," said Andrade. "And with women typically saving less for retirement than men,iii any strides toward improving financial well-being and retirement security should be applauded – and then used as a stepping stone toward the next financial goal."
For more information on the survey, please read the 2014 TIAA-CREF Advice Matters Executive Summary. For more information on TIAA-CREF's Advice and Guidance offerings, visit our Advice and Guidance Center.
TIAA-CREF has been providing advice and guidance since 2005 at no additional cost to clients. The company currently offers in-person financial services at more than 100 offices across the country, in addition to phone representatives who are licensed and trained to provide advice. These services provide individuals with suggested asset diversification strategies and investment recommendations to support their success in reaching retirement income goals.

The survey was conducted by KRC Research by phone among a national random sample of 1,000 adults, age 18 years and older, between July 28 and August 7, 2014, using a combination of landline and cell phone interviews. The margin of error for the entire sample is plus or minus 3.1 percentage points. The survey was not conducted among TIAA-CREF participants, and the survey questions and responses did not reference or concern any TIAA-CREF product, service or client experience.

TIAA-CREF (www.tiaa.org) is a national financial services organization with $840 billion in total assets under management (as of 10.1.14) and is the leading provider of retirement services in the academic, research, medical and cultural fields.

iii Forbes.com "Closing The Confidence Gap: Women And Investing" (May 7, 2014)

The material is for informational purposes only and should not be regarded as a recommendation or an offer to buy or sell any product or service to which this information may relate. Certain products and services may not be available to all entities or persons. Past performance does not guarantee future results.