Meetings provide opportunity to get closer to our customers
December 31, 2015 – In line with our focus on customer outreach and engagement, CEO Roger Ferguson visited nearly 30 TIAA-CREF participant locations in 2015, meeting with trustees, faculty, staff, and students of our client institutions. From Pasadena, CA to Miami, FL – and many points in between – Roger traveled the country to reach clients and participants and understand the issues that matter most to them.
Since the last formal meeting of CREF participants in July 2014, Roger has met with over 2,500 participants.
Roger covered a variety of topics during his visits, providing updates on TIAA-CREF, as well as the global economic and interest-rate outlook and the growing focus of diversity and inclusion in today’s workplace. During his campus visits, he frequently participates in audience question-and-answer sessions to hear what’s on our participants’ minds.

Some highlights include the following events:

o To celebrate a new, expanded office location in Cambridge, Mass., Roger hosted leaders from key client locations that will be served from this site, including Harvard University, Charles Stark Draper Laboratory, Massachusetts Institute of Technology, Forsythe Institute, National Bureau of Economic Research and Mt. Auburn Hospital.
o Roger paid a two-day visit to the University of Michigan—one of TIAA-CREF’s largest and oldest clients. While in Ann Arbor, Roger attended other events on campus, including partaking in a Policy Talks event at the Gerald R. Ford School of Public Policy, as well as meeting with members of the Center for the Education of Women (CEW).
Other visit locations include: California Institute of Technology, University of San Francisco, University of Pittsburgh, The Pennsylvania State University, University of Rochester, The State University of New York, University of Miami, University of Houston System, University of Colorado, Georgia State Financing and Investment Commission, Emory System, University System of Georgia, Clark Atlanta University, Hampden-Sydney College, Rhode Island Board of Governors for Higher Education, State of Rhode Island, Brown University, Charles Stark Draper Laboratory, Michigan State University and the City University of New York.
Looking to 2016, Roger’s calendar is filling up with visits to meet with the participants and institutional clients that TIAA-CREF serves. Stay tuned! 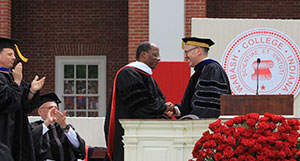 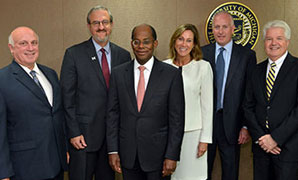 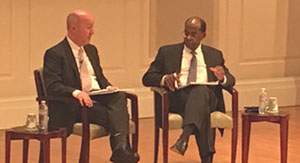 Professor Frank Warnock conducts a Q&A with Roger Ferguson during the University of Virginia Investing Conference.

Hear Roger’s conversation with Professor Justin Wolfers as he discussed his visit to the University of Michigan.

The Lipper Award is given to the group with the lowest average decile ranking of three years’ Consistent Return for eligible funds over the three-year period ended 11/20/12, 11/30/13, and 11/30/14 respectively. TIAA-CREF was ranked among 36 fund companies in 2012 and 48 fund companies in 2013 and 2014 with at least five equity, five bond, or three mixed-asset portfolios. Past performance does not guarantee future results.
TIAA-CREF products may be subject to market and other risk factors. See the applicable product literature, or visit www.tiaa-cref.org for details.
Annuity account options are available through contracts issued by TIAA or CREF. These contracts are designed for retirement or other long-term goals, and offer a variety of income options, including lifetime income. Payments from the variable annuity accounts [and mutual funds] are not guaranteed and will rise or fall based on investment performance.
C28755